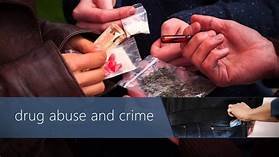 Nowadays, a considerable percentage of youths are addicted to drug abuse or committing crimes. This is a huge problem for every country because if the future of the country submerges into the dark, then the Government cannot improve. There are some reasons behind this kind of abnormal behaviours of them such as, the responsibility of family behind this and the contribution of smart phones for this situation for this mental state of youth.

Through these observations, it is clear that the immense number of youths in  have submerged in the dark. Therefore, the development of the countries is lagging, so the current status of the world regarding youth crimes and drug abusement is not good.

For this mental state of youth, parent neglect is the main problem. Parental offending can have an impact on the youth. This impact gradually affects the mind. Therefore, the attraction in crimes and drug abuse can be possible. Sometimes parents do not pay attention to their child for the busyness of their work.

As a result, their child feels lonely, so they increase their hands towards the dark movement. Sometimes parent-child disagreement and over strictness of parents towards their child can be the cause of this mental condition of the youth. Occasionally the youth may commit crimes seeing parent’s crime. If parents do crime in front of their children, this opens the way to committing crimes for their children.

The family is the main building blocks for their children, especially their parents. Nowadays the family structure is changing, the number of divorce is increasing, and more children are bringing up in single, step, and cohabiting families. The family separation will feel an impact in the mind of youth.

The cohabiting nature of parents is also a bad example for the youth. After the separation of parents, the youth is staying either with their father or their mother. It is difficult to always take care of their children for the single parent. Therefore, the youth is feeling depressed and lonely. To reduce their loneliness, their mental trauma they start to consume drugs.

These kinds of abnormal families also can be the cause of youth crime. After watching the disagreement between their parents, the child suffers from a mental illness. The youngster feels helpless and suffers mental trauma. In their trauma, the youth can commit crime because in that time they are not in a mature sense of mind. As per the report there are 47% divorce cases happen where the couples having children in the world in every year.

The home is the natural school of every child and the parents are the best teachers, if the parent does not provide their children the right conscience, then their children cannot learn what is right and what is wrong. Sometimes the youth suffer gender inequality that is specially happened with the girl child. The parents give their full attention to their boy child. Therefore, the girl child feels neglected, they suffer from mental trauma.

To decrease their mental stress as well as their pain the female youth take help from the drugs. If the mental trauma increases, they also can commit the crime like murder. Sometimes the youth behave very rudely with everyone, the parents don’t give any importance to this, and don’t ask them the reason if they are in trouble or not. Therefore, they keep their complications in their mind; this gives him a mental trauma.

The trauma drags the child towards the drugs and from there towards the dangerous crimes like stealing and murder. If the parents reduce to take their crucial decisions like divorce, cohabiting after thinking about their children then this situation can go to a better position.

The parents may play an essential role in the involvement of youth drug consumption. If the parent involved in substance abuse and the relationship between their children and them is right, then there is a high probability for the youth to be involved in the drug abuse.

These types of youth are forced to do work for earning money instead of education since childhood. Therefore, mixing with the wrong peer groups, they start drug abusement as well as trafficking as they cannot differentiate between good and evil. They also consume drugs to release their stress and pain.

Contribution of smart phones for youth crime and drug abuse

Through the smart phone, youth can browse the internet so that they can find several websites, among them some are helpful, but some are not. They are not aware of these, so they open these websites that are dangerous for them.

These kinds of websites can have a bad impact on youth’s minds as well as help to grow tendencies of committing crimes. They may also start taking illegal drugs after seeing some internet videos or articles.

Sometimes youth could attract some sexual sites and gradually, this attraction drags in force to commit crimes like rape. Sometimes the youth may commit the offence to win some illegal online games like the blue whale.

The youth may also commit the crime by seeing some videos and clippings of committing crimes. They can get inspiration from these kinds of videos. They may fall in the trap of some dishonest man though their social networking sites and can start to consume drugs convinced by their words, so the use of smart phones should be restricted for the youth. Some websites should be disabled to access for the youth.

Through their mobile phones the youth are getting connected with some illegal workers and convinced by their words the youth can be a part of some dangerous criminal offences like exertions, sex and drug racketing, kidnapping and child trafficking, bank robbery etc. Unknowingly this is a criminal offence, inspired by social media, the youngsters do hack of other people by their mobile phones.

Videos shared by the social media often can be manipulated by the youth in doing criminal offences like stealing as well as consuming drugs. The youth do some criminal offences by learning from their Smartphone. Nowadays, the youth can even make some unethical elements like bomb watching the internet videos.

After being influenced by some internet videos or clippings, the youth can do some dangerous crime like bank robbery, kidnapping etc. Their behavior may become very violent and aggressive. Therefore, the aggressive and violent nature of them can help to commit some serious crimes by the youth.

DO YOU KNOW ABOUT TRANSGENDER FTM SURGERY PROCEDURES ? LET’S LEARN...

How can you protect yourself from Sunburn? Learn what Shahnaz Husain...