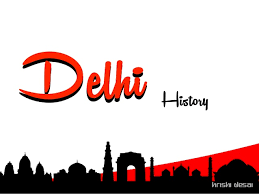 Anyone who has visited Delhi cannot help but notice the multi-dimensional cultural atmosphere in the aura of the city. There are local people speaking Urdu, Hindi, Punjabi, apart from almost every language in India, who go there are students or workers. Apart from being the administrative capital of India, the city represents in history the unending cultural flow that the city has witnessed.

Delhi has a long history of serving as capital region to many empires, throughout ages.

In the year 1354, Firuz Shah Tughlaq, abandoned the capital city of Daulatabad, and established his capital in the present Firoz Shah Kotla region of contemporary Delhi. He named this city Firozabad. After the Tuglaqs were attacked subsequently by Timur, the Lodis and the Sayyids, Firuzabad remained an imperial center.

In 1526, Babur, the first Mughal ruler in India made Agra the base of his empire. Humayun’s capital, Din Panah, was taken over by Sher Shah, who built a capital fort in the historical region around present Delhi, believed to be the Indraprastha region of the epic Mahabharata.

INDRAPRASTHA AND THE FIRST MUGHAL QUILA

Indraprastha is the foundational site of the epic Mahabharata, the capital of the Pandavas. It is believed to be located in the present vicinity of contemporary Delhi. The Purana Quila, constructed from the year 1533, has been attributed to the rivalry of Humayun and the Afghan rule Sher Shah.

The site of Indraprastha, historians say, is a statement of legitimacy by taking over such a historically important site. A Mughal chronicler had written that Humayun’s fort was built on the site of the mythical Indraprastha.

Chandni Chowk is the most busy, crowded and historically rich place of the present Old Delhi. It was also the grandest marketplace in the Mughal empire. Built in the 17th century, it was designed by Jahanara, the daughter of Emperor Shah Jahan. ‘Chandni Chowk’ translates to ‘moonlit intersection.’

Stephen Blake writes that the chowk was octagonal, with sides of one hundred yards and a large pool in its center. In the north, was the caravansarai (roadside inn) and a garden. In the south was a bath. The moonlight reflecting from the central pool gave it the name ‘Chandni Chowk.’ Eventually, the entire place from the Lahori Gate to the Fatehpur Masjid acquired the name.

The Old Delhi region was founded as the walled city of Shahjahanabad in 1693. This happened when Emperor Shah Jahan decided to move his capital city from Agra. He also oversaw the construction of the Diwan-e-Khas, or the Hall of Special Audience in the newly completed Qila-e-Mubarak or the Red Fort.

Thereafter, the city thrived as capital of administration, and center of cultural synthesis in art, poetry, music and artisanship.

In 1911, just after Bengal had undergone a political unheaval after the Partition of Bengal and the Swadeshi violence, thereafter,  King George V of Britain proclaimed that the capital of British India was to be moved from Calcutta to Delhi. Construction began in 1912, a few kms away from Delhi centre, and became known as the new capital of India in 1931.

New Delhi would thereafter be lined with colonial administrative buildings, museums and research centers. The All India War Memorial Arch, commonly known as the India Gate, was designed by Edwin Lutyens, in commemoration of the Indian soldiers (British Army) killed in the great war and the Anglo-Afghan war.

After independence, New Delhi remained the capital city of the Republic of India.

‘Beloved Delhi’: This book explores how Dilli became the city of poets, and of Urdu (scroll.in)

WHICH POLITICAL PARTY IS MORE STRONGER THAN OTHERS IN UPCOMING BENGAL...