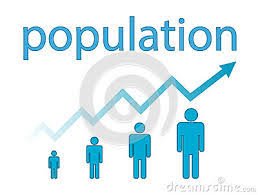 Population has became a serious issue for India, which prove to be a mith for upcoming generation.

The population is the entire pool from which a statistical sample is drawn. It divided into certain groups of people, objects, events, hospital visits, or measurement. Population is said to be an aggregate observation of subject grouped by a common feature. It can be divided by any number of characteristics within group that statistically used to be draw.

Most of the tin the statisticians and researchers want to know every entity of population, they draw the most precise conclusion possible. This is impotencial most of the times, since population sets tend to be quite large.

Some of the major population problem in India are as follows:

Unemployment: unemployment in India rate rose sharply to 9.1% in December 2020, but the discrimination of unemployment had been collected traditional by the researchers. The pressure of unwanted increase of unemployed youth of employable age.

It may indulge in unlawful activities and case harm to the law-abiding people. The youths became burdan on the society. A large proportion of population is dependent on agriculture which is mostly in traditional method. The obsolete equipment’s and inadequate financial resources. Consequently, the population per area is low.

The educated and skilled person also have very limited appreance, consequently both the uneducated and educated, skilled and unskilled workers migrate to urban areas’ in search of jobs.

The town and cities have become overcrowded due to the searching for the job, making living conditions poor and resulting into socio-economic and environmental problems of violance crime, population etc. The secondary and tertiary sectors were being less development. Thus, there are less opportunity for both the unskilled and semi-skilled and semi-skilled workers.

Rapid growth of population: It is a serious economic consequences. It encourages inequalities income distribution it limits rate of growth of gross national product by holding different saving and capital investment; it creates pressure on agricultural production and land and creats unemployment. Apart from these the quality of education for increasing number of children is adversely affected, as highly proportionate of children reduce the amount that sept for the education for each and every students.

It also affects in medical facilities and other social amenities, apart from these due to rapid growth of population many people are homeless and people have so access to safe drinking water.

Disproportionate Gender Composition: Most parents have no say in whether they have a boy or a girl, and yet many of them root for one or the other anyway at an ultrasound appointment. All parents have their own imagination ideal for their child, but there are discernable pattern on the parents’ hope- when they get- or don’t get- what they want.

They before on the whole preference on boys. But now in matter on boys and girls in the 21st century it doesn’t matter. It reflect the fact that having a son instate a daughter. Most of the parents is presumably hope of having a boys.

The bistoical bias towards boys- which persists many part of the world likely has to do with parents’ expectation that boys would grow up, they would became more productive economically. But not the girls are also no less in society now they also became same as boys. In this century the parents prefare both boys and girls.

Most of the countries in the world have more woman then men. But in our country female morality is higher in these nation. This has resulted in there being more men then woman in India. The sex ratio is lower then 1000 except in two state Kerala and Pondicherry. India is one of the few countries where the child sex ratio between age of 0-6 been declining.

Poor stranded of living: The major causes is malnutrition: The major causes is malnutrition in Indian, where diet often lacks in both quality and quantity. Those woman who suffering from malnutrition are less likely to have healthy babies. Nutration is deficiencies inflect long-term damage to both individuals and society. As compared with their better fed peers, nutrition- deficient individuals are more likely seviour chance to havely infacious diseases such as pneumonia and tuberculosis which lead to a higher mortality rate.

The ignorance of people, inadequate medical facilities and lack of financial resources came in the way of improving the housing and health conditions.

As, the population much affected the Indian economy, government should take certain steps against population for the beneficiary of upcoming generation.

“Skin and Pollution” Environmental Pollution is severely harming the skin!!